"I just wanted to be honest about everything, from my musical influences to my story," muses Neal Francis. After years of dishonest living - consumed by drugs, alcohol, and addiction - such sincerity is jarring from the 30-year-old Chicago-based musician. Liberated from a self-destructive past and born anew in sobriety, Francis has captured an inspired collection of songs steeped in New Orleans rhythms, Chicago blues, and early 70s rock n' roll. There is a deep connection between Francis's childhood - his obsession with boogie woogie piano, his father's gift of a dusty Dr. John LP - and the songs he's created. The result is an astonishing collection of material without parallel in the contemporary funk and soul scene. The influences are unmistakable: the vocal stylings of Allen Toussaint and Leon Russell; the second line rhythms of The Meters and Dr. John; the barroom rock 'n' roll of The Rolling Stones; the gospel soul of Billy Preston; the roots music of The Band. Francis pays tribute to the masters but has his own story to tell: "It's the life I've lived so far."After playing his first live show in November 2018, Francis was signed by veteran agents Joshua Knight and Phil Egenthal of Paradigm Talent Agency. 2019 brought a North American tour supporting Australian band The Cat Empire as well as radio play on KEXP, KCRW's The Morning Becomes Eclectic, and BBC Radio 6. Francis and his four-piece band performed at festivals such as Summer Camp and the New Orleans Jazz & Heritage Festival and shared the stage with The Meters and Lee Fields & The Expressions. Francis continues to tour relentlessly to promote his own music. "I'm doing this to fulfill a drive within myself, but also to pay tribute to the gifts I've been given. And it comes from a place of immense gratitude. I've been given so much in my life, especially in the last two years, that this feels like a bonus." BOBBY OROZA - Strange Girl B/w Down On My Knees 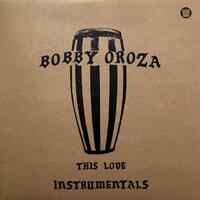 VARIOUS - Can You Feel It 2: Modern Soul Disco & Boogie